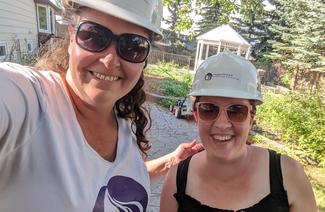 Airdrie P.O.W.E.R. was founded in 2015 by Crystal Boys. P.O.W.E.R.'s mission from the beginning has been to bring resources, education, and support to the community of Airdrie around the issue of domestic violence. The dream of opening a shelter right here in Airdrie was shared by many, and through volunteers, board members, and many donations, P.O.W.E.R. continued to speak out about the needs and issues of domestic violence here in the city.

From small beginnings, P.O.W.E.R. continued to grow, and to dream. When the idea for the Day Shelter was born, P.O.W.E.R. became even more determined to make this a reality. Finding a location, raising funds, drawing up blueprints, all became the new reality for the small board team.

It was a huge task; the enormity of what needed to be accomplished was daunting. Despite the difficulty, P.O.W.E.R. continued to move ahead. With a location secured in early 2019, the board was eager to begin renovations. However, issues with zoning and permits continued to push the start date further back.

Groundbreaking on the location happened in September 2019. With smiles and hardhats, the P.O.W.E.R. board watched MP Blake Richards take the first sledgehammer swing at the wall. Hopes were high, excitement was strong. Construction was moving full speed ahead, when asbestos was found. Everything ground to a halt, and all proper abatement protocols were followed.

The budget skyrocketed, the timeline increased. Setbacks became a daily struggle. Still, things were moving forward until March 2020 hit. Just like everyone else, P.O.W.E.R. felt the effects of the pandemic and lockdown as things once again came to a halt. Time and patience were wearing thin, but through the summer volunteer groups came in as they could and helped move things along. The community pitched in with amazing generosity, and finally, finally, P.O.W.E.R. got occupancy of the finished facility in December 2020.

After some time to furnish and prepare, the Day Shelter was opened to clients in February 2021. P.O.W.E.R. is celebrating this amazing milestone, and looking forward with anticipation to the women and children we will help, and the difference we will make in our community. 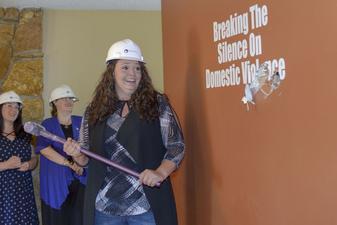